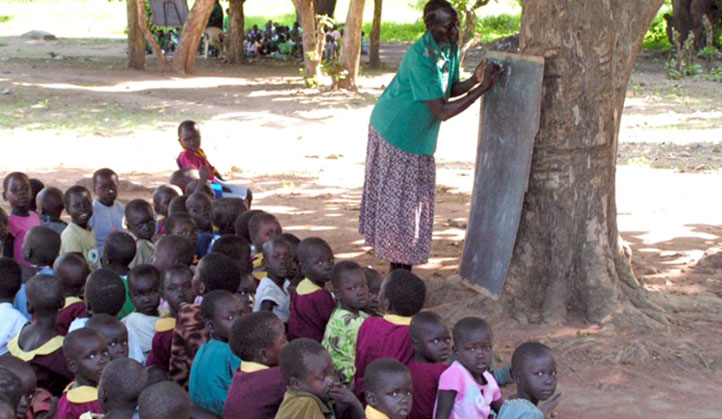 A primary school which operates under a mango tree

Sometime in September, this year, Mario Obiga Kania, the minister of State for Internal Affairs, visited the Edakua Community Primary School in one of the sub-counties of Arua District. As a leader from the West Nile Region and a constituent of the area, it was incumbent upon him to see for himself the range and level of socio-economic activities the National Resistance Movement (NRM) Government is undertaking in the district. Given this, he should have been appalled at what he saw of what Edakua Primary School is.

It typifies and gives an eloquent picture of the level of education in the country – specifically at the Universal Primary Education (UPE) stage. It is a community school, which means that, the Government treats it as a private institution left to its own devices, apart from adhering to the general and acceptable education policy.

When the UPE policy was enunciated those many years ago, the idea was that a credible standard of education would be availed to the millions of children so that they would be learned enough to access the higher levels of education. Those levels include qualifying to attend the Secondary school stage of education and then accessing the tertiary levels. This cannot be reasonably said for the bulk of the more than seven million pupils that today attend the Primary section of the educational system.

Edakua is one of the 33 community schools in Arua District, in which its Primary One and Two pupils, learn under mango trees. The unpaid teachers, simply squat by the tree trunks, where they prop up their uneven blackboards, for the equally squatting pupils, to take their learning instructions. Needless to say, they will be in-attentive in the dusty grounds of the mango trees.

By the time some of the more than 380 pupils reach the Primary Seven level to sit their Leaving Examinations, as usual, less than ten of then can pass the examinations to qualify for Secondary school. In fact, none of them ever scores a First Class pass. This means that, for all intents and purposes, in this area alone, about one thousand children, yearly, will revert back to be villagers with no skills; and no foreseeable organized future.

Even if the district UPE Primary school pupils did well, which is not the case, the percentage of these people will undoubtedly impact the whole level of social access the district will have. Multiply this by the more than 120 districts in the country and one is able to grasp the immense problem the education system is faced with.

For the NRM Government, whose leaders like Obiga Kania, are strutting around, proclaiming “steady progress” among the communities, this is a sober reminder of what their legacy is likely to sound like.  More than thirty years later of the regime’s focus on UPE and giving “education for all”, what it has boiled down to is simply, spreading illiteracy – or at best, creating adults who will only know the rudiments of the A B C and counting the intial numerals.

It is interesting to note what Obiga Kania promised Edakua Primary School, which is under the auspices of the West Nile Catholic Diocese. He said that he will attempt to get non-governmental organizations (NGOs), to assist donate to the school to construct the necessary infrastructure and buy the scholastic materials for the school.  Hopefully, this will take into account the payment for the wages of the teachers, too.

However, is this not the role of the Government? Why go and look for NGOs to come and do the work and provide the facilities that a Government is mandated and put into power to do? Moreover, as it has happened in this country, the NGOs are all the time being suspected of being, either supporting people who are the opposition “enemies” of the regime, or outright terrorists.  In such an atmosphere, which NGO will come and stick its neck to come and help?

Edakua Primary School represents the need to re-evaluate the UPE policy in reference to what we call, “community” schools. In any case, why community, at all?  Is not the whole system of government for the care of the whole Ugandan community?

Continue Reading
Advertisement
You may also like...
Related Topics:featured

Ikebesi Omoding is the acclaimed author of a weekly column titled: From the Outside Looking In

Who is responsible for empowering women, if I may ask?
Saving misunderstood by Uganda’s majority

The Other Side of the Coin

It’s easier for Uganda to borrow than control wasteful expenditure

Who borrows $10 million by mistake?

The Other Side of the Coin