Civil Society organizations advocating for the promotion of indigenous foods want the government to shelve the Bio-technology and Bio-safety bill 2012 alleging that it is being pushed by foreign interests.

The activists under an umbrella organization, a network that claims to bring over 250 NGOs in 12 African countries have warned government against ” tinkering with the current bio safety law”.

“We are against efforts towards the enactment of the current law because it is intended to create space for GMOs and in essence pursuing an agenda for multinational companies in developing countries,” said Joseph Ssuuna who doubles as the Organization’s chairman both in Uganda and on the African continent.

Ssuuna’s call got support from PELUM’s regional Secretary General Faustin Vuningoma,  who warned about the risk of losing indigenous food species in the event that GMOs are permitted.

“According to section 2 (a)-(h) of the bill, it is clear that the spirit (of the bill) is to promote the development of GMOs in the country rather than regulate them. This therefore means that the

bill will be used to create an enabling policy environment to ensure that GMOs are promoted in the country,” he noted.

But the Head of the Biotechnology Center at the National Agricultural Research Laboratories (NARL) at Kawanda Dr. Andrew Kiggundu dismissed PELUM’s call to shelve the bio safety bill as both irresponsible and myopic.

“It is this bill that is expected to establish a regulatory body for biotechnology in Uganda to ensure safety and fairness. Do we then want to run this kind of technology without any form of regulation?” Kiggundu asked.

Dr. Andrew Kiggundu of the National Agricultural Research Laboratories argues that lack of a law is more dangerous as it keeps the country vulnerable to influx of unregulated GMO products

Kiggundu and other scientists have argued for months in support of the bill that in order to better protect the country against any influxes of unwanted GMO products, it is better to have a law to regulate the science by putting in place penalties against anyone who imports GMOs without the consent of government.

Responding to PELUM’s crusade against GMOs, Kiggundu added: “It is also not true that GMO’s are not in the best interest of Uganda. If GMOs have benefited other countries not only in the food sector but also in many other areas, why should Uganda not benefit from the same? ”

Apart from providing a regulatory framework for facilitating the safe development and application of biotechnology, the bio-safety amendment bill 2012, seeks to establish a competent regulatory authority, a national focal point; to establish a national and institutional bio-safety committee while it also provides for research and other related matters on the subject.

Continue Reading
Advertisement
You may also like...
Related Topics:GMO

The exciting origin and journey of Koff Bomb 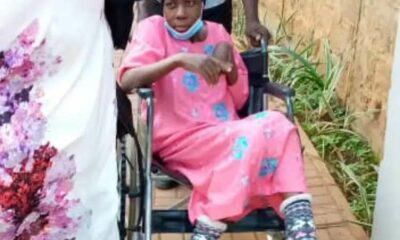 Selling one’s kidney is now easier than finding a job!